By Mary Agidi Over 500 children of Irekari axis of Ose Local government area of Ondo state have been empowered with school bags and notebooks by Seun Alabi Foundation, (SAF)to celebrate end of the year children’s party with them. Also, the foundation thereafter hosted the first of its kind Miss Irekari Beauty Pageant and Talent hunt show where the winner was presented a sum of N100,000 and one year modeling contract.

The children, aged between three and 10 were selected from all the four towns that form Irekari segment of the local government which are, Idoani, Idogun, Imeri, and Afo. The Chief Executive Officer, CEO, of the foundation who is a son of the soil, Dr. Seun Alabi noted that the rationale behind organising the party is to let the children of the towns taste the life and the fun other children have in the cities. “We celebrated over 500 children selected from the four towns of Irekari and we gave them school bags and exercise books. This gesture is to allow our children experience what other children enjoy in the city”, he said. 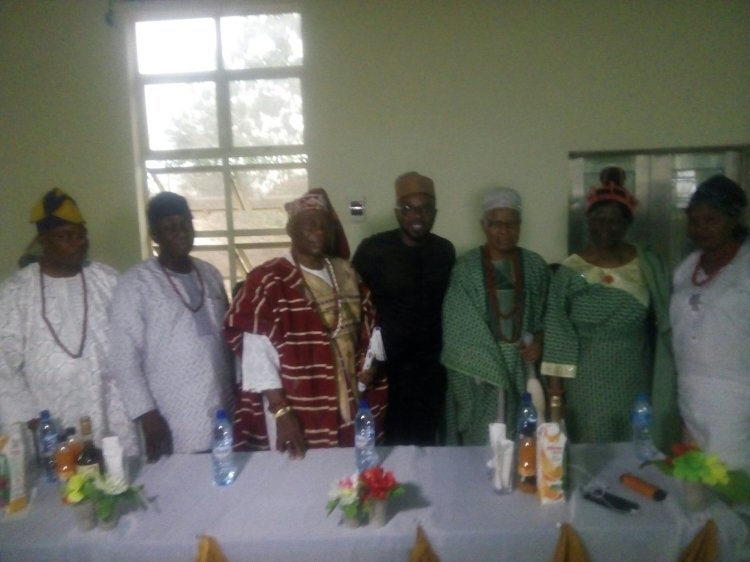 The children who were also given packaged food enjoyed the party to the fullest dancing to different musical sounds as coordinated by the invited Clown Master of Ceremony and also climbed bouncing castle arranged for them. Declaring the beauty pageant event open, held at Unity hall Idoani immediately after the children’s party, the Alaani of Idoani, Oba Major Gen.(rtd) Olufemi Olutoye expressed satisfaction in the initiative.

He appreciated SAF for the programme and for the unflinching support given him by his wife and everyone in his crew to achieve the success while canvassing for such gestures from other well-meaning indigenes of the towns. The beauty pageant which featured five contestants had Miss Moromoke Ibrahim from Idoani as the crowned Miss Irekari 2018. Mother of the winner, Mrs. Banke Ibrahim thanked God for the grace given her daughter to become Miss Irekari 2018 , saying “this is the day the Lord has made, I will forever be joyous in it”. She appreciated SAF for the fortune and upliftment he brought to their family and prayed that God continually grant him success in his endeavors. Other contestants were also presented a cash gift for participating in the contest. In his address, Dr. Seun Alabi assured that the programme will be repeated come 2018, and expressed optimism to make it an annual event. According to him, the rationale behind the initiative is geared towards empowering and encouraging Irekari youths to showcase their talents, to help women, especially the widows, and to bring the names of the area to the forefront in Ose local government by ensuring that Irekari is given recognition in the comity of towns in the local government area and the State as a whole. “It is also a means to give back to our fatherland; this is our home which must not be abandoned, individuals must endeavor to contribute his/her quota in any little means to the development of irekari.

Alabi also lamented that Irekari has not been in the limelight of Ondo State in terms of social activities, which had in one way or the other hinder the development and progress of these communities. “It has also affected our talented young ones in displaying their God-given talents”, he added. He highlighted some of his achievements in Irekari so far to include sponsoring JAMB for 49 youths, while 150 people were assisted for Npower and also partnered Npower to have registration centers in Irekari. He noted that, “in August 2017 we sponsored the soccer competition between the four communities where Idoani emerged winner with a cash price of N100,00, Idogun came second with N75,000, Afo came third with N50,000 and Imeri came fourth with N25,000”. He added that over 250 widows received SAF care package which included rice, vegetable oil, and money. At the event, Alabi was bestowed an award of honour by the National Association of Nigeria Students Joint Campus Committee (NANS JCC) as philanthropist of the year 2017. Presenting him the award, Chairman of the association, Mr Atolusi Damilola noted that they deemed it fit to give him the award in consideration of his youth-oriented initiatives and community empowerment programmes. Alabi also used the medium to present a cash gift to the widows of the three Policemen who lost their lives during the Armed robbery attack in Ifon the headquarters of Ose Local government a few months ago. The Local government chairman, Mr Agboola Ajike commended the effort of SAF for rendering a selfless service to his fatherland. The performing artists at the event were encouraged with cash gifts by the organiser. Dignitaries at the event included the Onimeri of Imeri ,Oba Babatunde Adeniran, Alafo of Afo, and APC chairmen from the four towns.