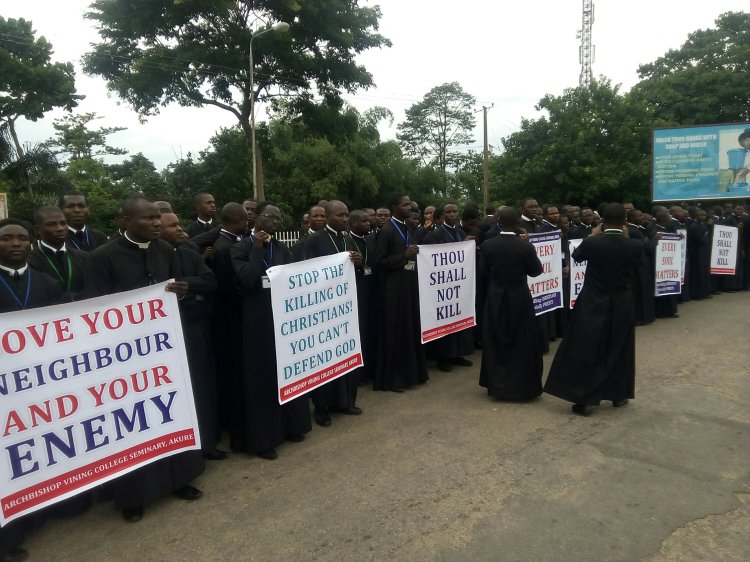 In expressing their displeasure against the incessant killings of Christians and other innocent people in some parts of the country, over 100 Anglican priests of the Archbishop Vining College of theology Akure at the weekend made a protest procession from the heart of Akure the Ondo state capital to the governor’s office wearing black outfits.
The priests, led by the Dean of the college, Ven (Dr.) Justus Omoyajowo displayed different placards to express their grievances some of which says “Love your neighbors and your enemy, Stop the killing of Christians/you can’t defend God, Every soul matters, stop the killings of Christians especially priests” and many more.
Explaining the purpose of the procession to the Chief of Staff to the State governor who received them on behalf of the governor, Omoyajowo expressed dissastifaction on the unabated killings of Christians in the Northern part of the country which recently involved a Catholic priest in Benue state. 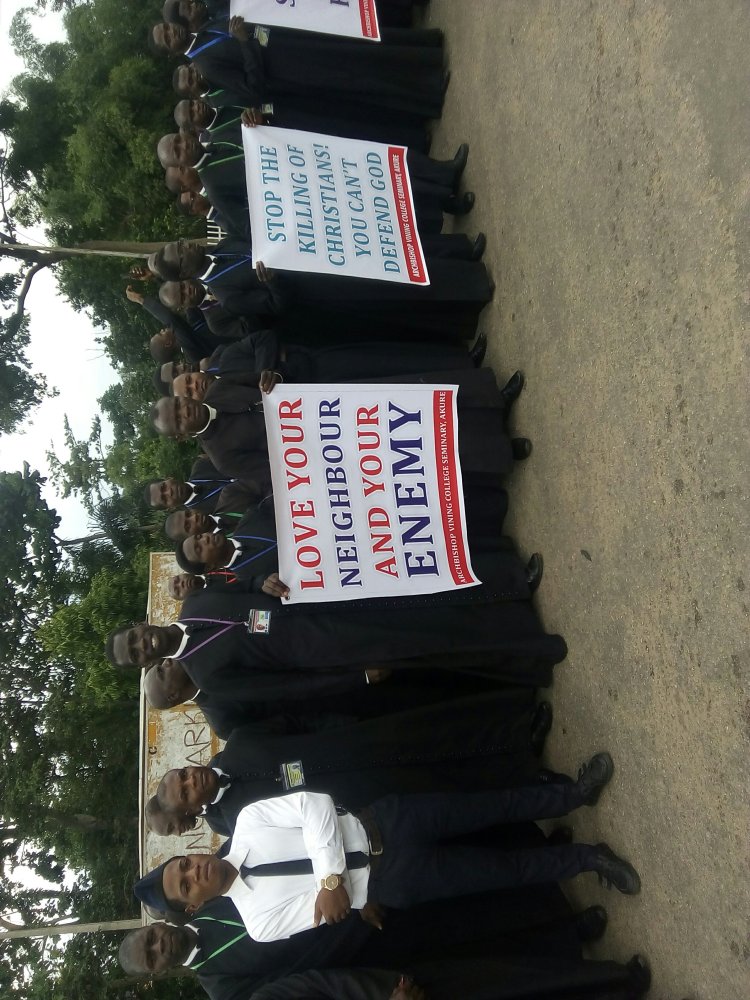 His words : ” We processed to governor’s office to deliver a message through a letter and symbolicly with our presence about situations in the country; the incessant taking of lives, especially Christians live.
“We were disquieted and very concerned with the latest killings which now involve the fellow priests in their sanctuary with members of their congregation.
” We are Anglican priests and that gives us concern, we have been praying about the situation but we thought we should process out of the institution and show our displeasure.
He therefore noted that their action is not a protest but just a procession in solidarity with the fellow Christians that were killed unjustly and to call the attention of the government to it before people start taking law into their own hands.
The College Dean appealed to the State governor, Arakurin Oluwarotimi Akeredolu (SAN) to kindly convey their message to the President about the situation and take urgent action in ensuring the safety of lives and property of Nigerians.
Responding on behalf of the governor, his Chief of Staff, Chief Olugbenga Ale condemned the ugly situation in the country and described it as saddened.
He commended them on how they expresesd their concern in a matured manner and promised to relay the message to the governor.
The Chief of Staff also joined his faith with them and prayed for the complete stoppage of the killings, saying it is getting to an alarming level.
“Nobody is happy about the state of affairs, over the killings and the way our fellow beings are being slaughtered on daily basis; but the way you have had your procession gives us a lot of hope that many of us can still handle issue with maturity “, he said.